A centrifugal pump is a machine that uses rotation to impart velocity to a liquid and then converts that velocity into flow.

Let’s break that definition down into its components so that we can consider each one in turn:

This article is part of Pumps 101, an eleven-part series of articles designed as an introduction to the fundamentals of centrifugal pump design, selection, and application. To get the most out of Intro to Pumps check out the full series:

“A centrifugal pump is a machine.” Every centrifugal pump includes an assembly of mechanical components that make operation of the pump possible. This mechanical assembly includes the pump shaft mounted on bearings, the sealing mechanism that keeps the pump from leaking excessively, structural components designed to handle the stresses and loads imposed on the pump during operation, and wear surfaces that allow the pump to be repaired and returned to its original specifications.

“A centrifugal pump converts velocity into flow.” Every centrifugal pump includes a casing. The casing is the hydraulic component that captures the velocity imparted by the impeller and directs the pumped liquid to the pump discharge point.

At the most fundamental level, a centrifugal pump consists of just these three components:

The impeller of a centrifugal pump is rotated rapidly to impart velocity to a pumped liquid.
If you’ve never seen a pump impeller before, visualize a boat propeller. 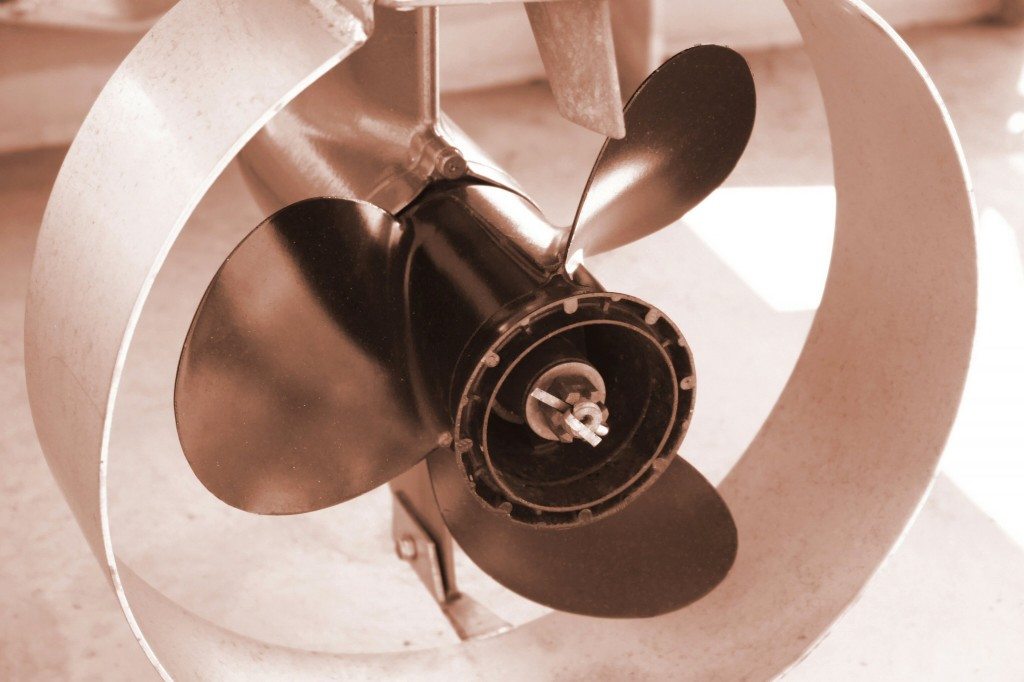 When a boat propeller is rotated it imparts velocity to the liquid around it. As the liquid moves, that velocity forces the propeller to move forward in the water.

Now imagine what would happen if the boat were anchored in place, firmly enough to prevent the boat from moving. Next imagine that the velocity generated by the boat propeller were contained and controlled so that a stream of water was created that you could direct where you pleased.

In a centrifugal pump you have an impeller rotating rapidly and imparting velocity to the liquid in the pump just as a boat propeller imparts velocity to the water in a lake. The casing is the part of the arrangement that takes that velocity, contains it, controls is, and sends it along in a useful direction.

There are many different types of centrifugal pump impellers. The most common types of pump impellers are discussed in our article Fundamental Pump Components: Volutes, Casings, and Impellers.

The centrifugal pump casing is the component of the pump that converts all of the velocity created by the rotating impeller into a controlled and stable flow and directs it out of the pump through the discharge point.

The most common type of casing is called a volute and it looks similar to a snail shell.

Beginning from the cutwater, as we move around the impeller, the distance between the volute and impeller gradually increases until we reach the discharge point. This steady expansion of the area around the impeller means that pressure will build moving from the smallest clearance to the greatest and the increasing pressure will push the liquid out of the discharge point.

We’ve just touched briefly on the topic of pump casing design in this article. Additional information about the most common types of pump casings can be found in our article Fundamental Pump Components: Volutes, Casings, and Impellers.

Centrifugal pumps aren’t much use on their own. They need to be combined with other equipment to be useful. The combination of equipment that renders a centrifugal pump operable is referred to as a pumping unit.

At a minimum, a centrifugal pumping unit includes at least two components: a pump and a driver.
In the majority of cases, the driver in a centrifugal pumping system is an electric motor. However, that isn’t always the case. Pumps can also be driven by other drivers such as natural gas engines or even steam turbines.

The most common pumping unit combines a centrifugal pump driven by an electric motor.

The image above is of a close-coupled end-suction pump. This is the simplest and most common type of centrifugal pumping unit. In this type of pumping unit the impeller actually mounts on the end of the motor shaft and the pump casing mounts right onto the face of the motor. With a close-coupled pumping unit, the motor bearings and shaft comprise the majority of the mechanical portion of the pump.

A centrifugal pump is a machine that uses rotation to impart velocity to a liquid and then converts that velocity into flow.

Every centrifugal pump consists of an impeller, a casing, and an assembly of mechanical components that make it possible for the impeller to rotate within the casing. The impeller rotates rapidly imparting velocity to a liquid. The velocity is converted into pressure and flow by the casing.

This site uses Akismet to reduce spam. Learn how your comment data is processed.

About Intro to Pumps

We use advertisements on this site. If you click on a link or banner on this page it may be an affiliate or Adsense link for which we receive compensation.